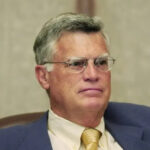 Sam Bowman a 1962 graduate of Penn State University, served for three years as a junior officer in the Navy. He worked briefly for The Salvation Army before pursuing a master’s degree in social work at the University of Pittsburgh. He was executive director of the Neighborhood Services Organization for 21 years, creating strong alliances with the United Way and United Methodist Church. At the Oklahoma City Community Foundation from 1995 to 2005, Sam built partnerships between OKC Public Schools and a variety of non-profit organizations. He was elected to the OKC city council in 2003, representing Ward 2. He focused on strengthening neighborhoods, notably advocating for use of MAPS and other municipal bond money to build sidewalks in dozens of areas. He was instrumental in the expansion of Oklahoma City’s bike trail network to more than 80 miles, including connection of the city’s three major lakes with a single path. At the time of his death, Sam was a member of the board of directors of the Freedom Center—providing strong leadership in raising funds to renovate the center and constructing a new Clara Luper Civil Rights Center to celebrate the movement’s history in OKC.