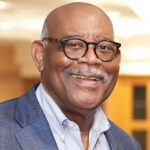 Dr. Terry Childers became the first African American City Manager in Oklahoma City history on September 15, 1986, and one of the youngest. Still, more than setting precedent, Childers helped Oklahoma City recognize its potential and worked to achieve it. From the moment he stepped into office, Childers stressed the importance of beautifying Oklahoma City, not only improve quality of life for residents, but to increase citizens’ respect for their hometown. He worked diligently and successfully to enhance the city’s street, water, and sewer systems, creating the first capital improvement systems the city had ever seen. As federal revenue declined, Childers recognized the need for change. Working for a solution, he devised a reorganization plan in 1986 that sought to “streamline city government by reducing duplication and fragmentation.” It created a new environmental services department and changed the structure of the City Manager’s office. The plan provided for an additional Assistant City Manager and reduced Childers’ direct supervision from 21 to five employees, giving him more direct oversight of the city budget. Through his actions as City Manager, Terry Childers helped beautify and strengthen Oklahoma City. As then-Councilman Goree James hoped, children of the future would remember Childers not only for his skin color, but for his deeds – as “a black City Manager who rescued the city.”